A requirement for the Abertay Digital Graduate Show is to create and display an A2 poster that encapsulates and represents the work so that people can get an idea what you’ve created before they take a deeper look at the actual work and the research that was undertaken.

I’ve chosen to create a movie-style poster to tell people that my work is a movie (a short one) featuring an armature character. To me, the main things that tell me a poster is about a movie is the layout of the title and text including the credits. I’ll use the credits text to credit myself as well as include links to my website and social media channels. There will also be room for a gag or two, I will want to fill in the space so that from afar it looks like a fully cast movie production. 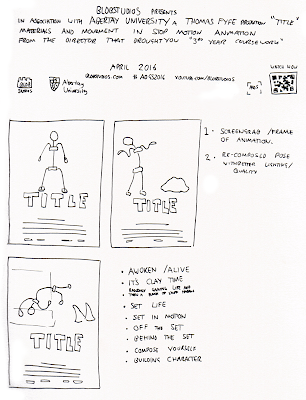 These sketches show what I am thinking about making. I took inspiration from posters I’d already researched, in particular featuring the character with a non-detailed background. I considered using a frame from the animation but decided it’d be beneficial to replicate it by re-composing a stronger pose and allowing myself to achieve better lighting and image quality by doing this. I’ll either replicate a frame from my animation or be creative and create a scene that represents my animation but might not be a direct scene from the animation.

I want to utilise and represent the texture that comes from stop motion, I’ll do this by utilising the background noise that is present through taking a photograph and will try to capture as much as I can through the photograph before altering it digitally. For the background I want it to be mostly dark, to emulate the style of poster The Lego Movie has (as seen in my previous blog post) or how the Minions promo material often have them appear in a white void. After meeting with Lynn earlier today she suggested maybe using a cardboard or clay texture that repeats and forms the background of the poster, similar to the process in making graphics for my team’s Global Game Jam game.

I’ve began layout this out digitally and will work on this further during the week. Similar to the way I created the business cards, I will create some draft ideas that I can get feedback on. Hopefully I can get this sent away by the end of the week to ensure it will arrive in time for the graduate show.