Control shapes are main interactions between the user and the rig’s functionality. They should be well located and easy to understand what you can do with them. 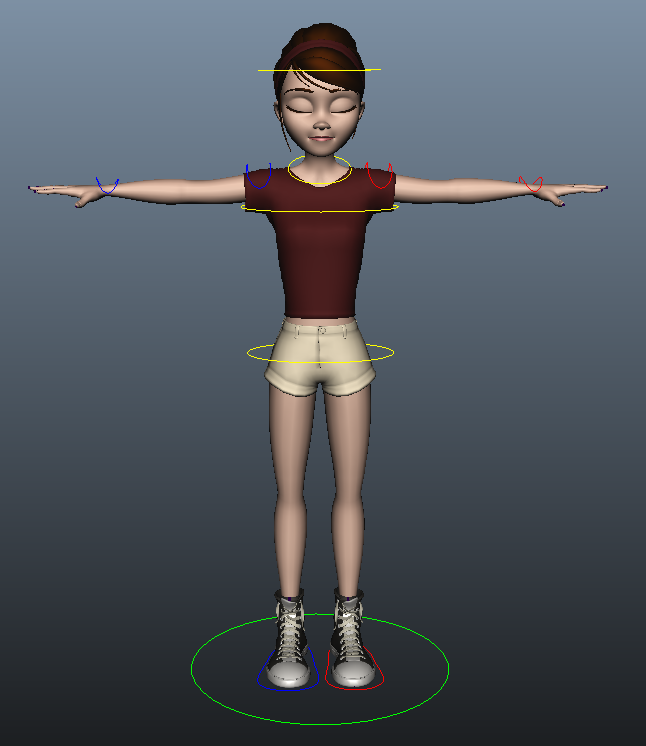 We have recently looked at how to set up IK solvers to create an Inverse Kinematics setup in a rig. I’ve shaped my wrist controllers around the wrist, this will be controller used to manipulate the arm. The shoulders have been given similar shaped controllers. Any controllers in the centre of the body have been given a circular controller scaled appropriately.

For the feet I edited the control vertexes to give control shapes that look like feet. We’ve been using a script to assist us in making these shapes as there are a number of steps involved. The important thing to note is that control shapes need to be able to be zero’d out to return to their default position. Having control shapes in offset groups allows us to do that (the group stores the translation difference from the origin).

As building control shapes and setting them up manually is quite time consuming and a script can be proven useful, this is something I may want to expand up for my scripting tool which could create control shapes with different shapes for different parts of the body.

I’ve given each control shape a colour, which helps with usability and distinguishing which control shape is for which side of the body (which can be useful when animating and limbs cross).

Problems arising here were mostly down to the resizing of control shapes which needs to be done in hull mode so it doesn’t affect the rotation or scale values of the object. This makes things difficult for getting two shapes the same size and orientation. My rig’s control shapes aren’t perfectly even but not being perfect is seemingly allowed to a certain extent with rigging an organic character.